I’ve always known that my ritual of drinking tea every morning and putting on lavender before I left was beneficial to my spirit but now I know it for a fact because I didn’t do it yesterday. I took a Lyft to the airport which was great and both my flights were on time which was also a relief, there was also a Popeyes near my gate so it was just a lovely morning all around honestly. When I landed in San Diego I got my bag and got in a cab to the greyhound bus station and since I’m on vacation I decided it was tīme I acted like it and tried to pay for it with my credit card….but it was declined. As I was calling Capital One I was looking at my card and realized that it expired in March. I literally never use my credit card except when I’m on vacation which sadly isn’t too often. I immediately started freaking out because you need a valid credit card to rent a car, I had already made a reservation to rent a car the next day after I got back from Tijuana. My phone was at 40% as I waited on hold for 20 minutes with the rental car company  but I hung up because I had to get on the bus to Tijuana and needed my phone to contact my airbnb hosts. Of course at this point I’m internally crumbling wanting to cry to my mommy or lay in the middle of the highway. The whole point of a road trip is to drive! The bus to Tijuana was annoying and weird, we kept stopping in these little shopping centers to let people on and off and they didn’t even glance at my passport. I got off at a different stop than I had originally planned because it was closer to where I was staying. Of course my phone didn’t work because I was in another country so I used a cab drivers phone. My host was f’n awesome. He was so lovely and gracious, we took a walk with his dog by the beach which wasn’t too far, he was very informative and helpful. I clearly like to do my own thing so I wanted to roam alone, he made sure I knew how to get back and I went on my way. I’ve been to random places in Mexico before but only when I was working as a flight attendant and once by myself to Cabo San Lucas when I had a week off, but its touristy there. Tijuana isn’t terribly nice, some people love it but I didn’t find it very inviting, I also couldn’t relax and fully be there because I didn’t know how the car situation would turn out.  I walked along the beach for awhile and went into a coffee shop and had one of best cups of chai tea that I’ve ever had and one of the worst turkey sandwiches. I walked back to the airbnb in a hurry because the sun was going down. There were a lot of men trying to stop me, I’m never scared to go anywhere but I was definitely uncomfortable. One man in particular tried to stop me but I kept ignoring him, I thought I was lost for a second but I made it back and as I was fumbling with the key to the gate a minivan pulled up with a man and a woman and a little boy, he told me that the man I just saw was trying to tell me that another man was following me all the way from the beach, he was trying to help me. I was horrified. Thanking all the gods I was safe indoors I went to bed super early, like before 9:30 early because I just wanted to wake up and go back  to SD to see about renting a car. Of course I got up super early as a result and was listening to ‘N Sync’s “Sailing” at 5:30 in the morning to clear my head. There was also no water so I had to wash my face and brush my teeth this morning with a bottle of water I’m happy I only took 2 sips of earlier. I don’t know why but I thought an uber could take me all the way back to the SD airport, like across the border. Greyhound was weird the day before and I just wanted to go, I confirmed with the guy as soon as I got in his car and we took off. I started to notice us going in circles but I didn’t say anything but then the driver pulled over and said he can’t go across the border because he doesn’t have a visa. SIGH. Have you ever just like really wanted to leave somewhere? Not like the usual antsy-ness like getting off work, the severe desperation of wanted so badly to go and not look back? That’s how I felt about Tijuana, Mexico this morning. The driver was nice enough to drop me off at the greyhound station in Tijuana, where I should’ve just gone originally. The line to get back in the US was a doozy but it was quick! 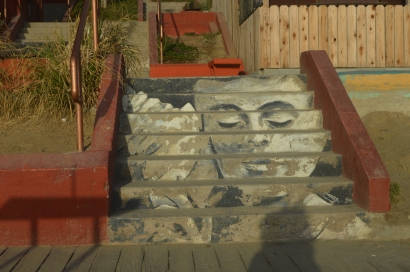 I was elated to be able to use my phone and take a $3 Lyft to the car rental place at the airport. I was nervous walking in but the guy at the counter couldn’t care less that I don’t have a valid credit card. All I had to was show him my return flight reservation and I was good. Well that was easy. I was out! So happy to be behind the wheel of car and nice one at that. I drove to my hostel and called my mom, relaxed a little then took a walk to a farmers market by the beach. While I was there this guy who was also staying at my hostel recognized me and we walked along the beach. His name is Reed and he’s been traveling by bicycle all the way from Washington. He wants to continue all the way to South America. I hope he does, he seemed to be in a discouraged state of mind, I had to remind him that he’s come so far so he’s obviously awesome and he can do anything. We were talking about the word travel and what it really means, he said to him its doing anything you don’t normally do, even in your hometown and he’s so right! We split up and I called a few peeps to let them know I was alive, got some tea from the farmers market as well as a blanket for this annoying person in SF and here I am laying on the bottom bunk of this hostel, geez almost 1,200 words. I’m sorry, get back to your lives just know that the corny quote “It’s not the destination, its the journey”…..its true….and I’ve only just begun.