Portland, how I have waited so long to be inside you. Not only because I will meet my traveling partner and finally see a few more brown people but me and Hilary need a break, we had a mutual agreement that she wanted to stay still and I need to not be operating heavy machinery for a few days. Before I left Eugene I noticed there was a software update on my phone, I figured I’d get it over with while I ate bacon pancakes at The Original Pancake House. After 100 years went by and it was over I couldn’t swipe my phone at all so I tried turning it off using only the top button, the only button I’ve ever used to turn it off, then I realized that you need to swipe to confirm shutting it off. Of course all the information I need is on my phone so I just started driving to Portland not knowing exactly where my hostel was. Like most of this trip the shortest distance driving days have been the most trying. As soon as I got here I went to the Apple store where the guy working shut my phone off using the top AND bottom button, somebody give this man a raise immediately. Finally I can go check in to my accommodations for the night. After circling the neighborhood multiple times I finally let Hilary be. I almost had a headache from the annoyance from my phone and parking but I loved my room and I went to a lovely grocery store and indulged in the hot food section as one should who has been traveling. I realized I really like going to grocery stores when traveling because your money goes further, it’s quicker than a restaurant, and much heartier than fast food. Clean clothes ladies and gentleman! I finally have them! I may or may not have been considering commando life but not anymore! I had intentions of taking a walk or being social in some capacity but I was beat, I talked to my friend Amy on the phone for awhile and watched Real Housewives of Dallas and I was out. The next afternoon I picked up my friend Lauren from the airport and we checked into a lovely airbnb. I know I said the airbnb I stayed at in LA was the best airbnb ever but this one in Portland you guys was the cream of the crop. Adorable as fuck, fully equipped, and right next to adorable coffee shops and little boutiques.

We went to Cannon Beach the next day where I’ve been wanting to go for years. When I saw a picture of this place years ago I couldn’t even believe it was in the US. It is so amazing, an adorable beach town with a huge rock in the sand. I don’t live for the “Goonies” movie like some people but it’s most known for that. I liked how foggy and chilly it was and there were so many sand dollars on the beach! 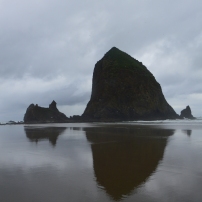 Later that night we had tickets to see Charles Bradley at the Crystal Ballroom. Lauren told me about him years ago when she saw him at a music festival in Atlanta. Originally we were staying at the Crystal Hotel which is conveniently right next to the venue…..that was until we realized our reservation was for 2017…..whoops! Luckily we’re in a city that accommodates a lot of travelers so we stayed at the luxurious Palms Motel instead, all I need is a comfortable bed and tea in the morning and I’m good. The Crystal Ballroom is beautiful, Lauren decided she’s getting married there, to who is TBD. Charles Bradley’s energy is immediately magnetic and so very loving. He reminds me your favorite uncle in the most non creepy way. I thoroughly enjoyed the show and was so happy Lauren gave me a rose petal from the roses Charles was giving out. On our way to Seattle the next day we went to see the second tallest waterfall in the nation, Multnomah Falls which also  has the shittiest parking, but it is free! 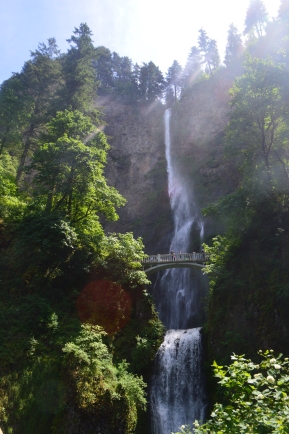 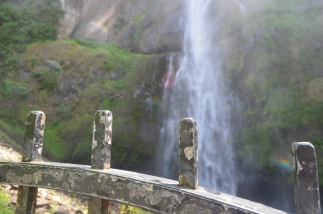 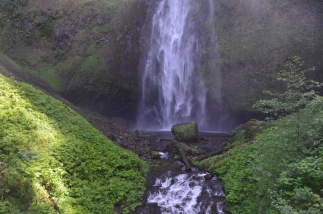 Finally made it to the Evergreen State, traffic was annoying of course, hostels are unpredictable of course but I am elated to be in Seattle, Washington because I love big cities and even more so when I have a good friend there! Tonight me, Lauren, and Casey, my home skillet from the first state, my home state of Delaware went to see the funniest comedy show! I was crying and choking at some parts of it which I know  usually isn’t something most people enjoy but I swear I had a great time! It was at this place called The Comedy Underground and the headliner was what’s his fucking name I forgot. After almost letting a homeless man into our hostel I’m about to get ready for bed, our room mate Katherine is from Houston and she is the loveliest, she reminds me of of of my aunts except really into astrology and she curses. Okay  866 words is so obnoxious of me GN. 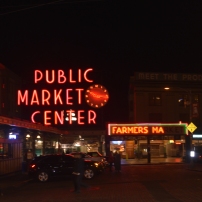